History of the Lunar Octet

The Lunar Octet began with a different name: The Lunar Glee Club.  It was formed as a forum for a group of Ann Arbor based composers and performers to develop and present create and original compositions. The original members had a wide range of musical backgrounds, including rock, classical, jazz, and Latin music. When brought together through weekly rehearsals, their influences yielded an innovative blend of creative original instrumental works.

​The band's original inception was formulated during the Summer of 1983: bassist Dan Ladizinsky, conguero Aron Kaufman, and trumpeter Kalle Nemvalts envisioned a band that would leave a lot of open mid-range sonic space by having no keyboards and a guitar that did not play chords. This left the mid-range frequencies to the drums, so 3 drummers could be heard, and the highs to the horns, and the lows to the basses who could play discernible contrapuntal lines. The guitar could traverse the sonic range, but not play with much polyphony, again more a rhythmic approach.

King Sunny Ade was an important influence, who played with 5 or 6 guitarists and about 8 percussionists who were respectful and orchestrated.

The notion of collective composition was critically important from the beginning.  During early rehearsals, the musicians brought skeletal ideas to each other, the horns worked out their parts, the drummers did the same, bass and guitar did the same, and the gumbo was tinkered to get the flavor right for each tune.

​The group began performing in local clubs and concert settings in 1984, and attracted increasing attention from the press and from audiences in Michigan and Ohio over the coming years. Through a variety of personnel changes, necessitated by migration of band members to other parts of the country, the group maintained a cohesive and enthusiastic camaraderie, giving it a longevity that is rare among comparable performing ensembles.

Because of confusion about whether the band included singers, the group's name changed mid-way through its life from the Lunar Glee Club to the Lunar Octet. 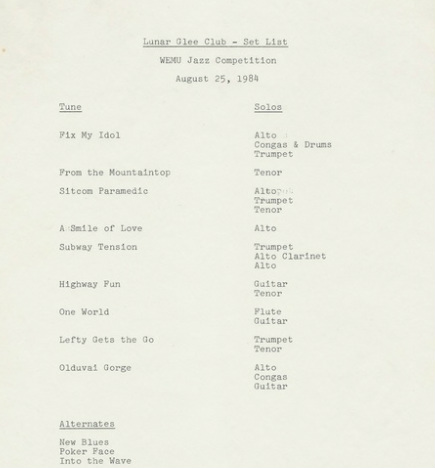